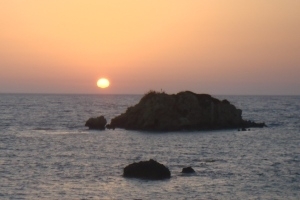 I was on my way to visit my grandmother and would just call her doorbell, when the door opposite of hers suddenly was opened by a very upset old lady.

– Did you see if the ambulance has arrived yet? I’m afraid my husband just died!

I went after her into the flat. He was sitting inanimate on a Windsor chair in the kitchen. Not a sign of breathing. According to her, he had already been sitting like this for more than five minutes. Although I had basic knowledge of artificial respiration, it felt more natural to support her.

She hugged me, hard and fast.

– Do you think he’ll get well? He has had infarct several times, but he never was this still before.

She collected some small things that might be needed at the hospital.

In a few minutes, the ambulance people arrived and soon left with the couple.

While she was locking her door, she apologized just so much for hugging a stranger. But I calmed her by saying that if I would have been in the same situation, I’d done exactly the same.

This was the first time for me (at least at an age where I can grasp things) that I came in close contact with someone dying. It made me think a lot.